Seminar on Dementia prevention and control held at DIU

Seminar on “Dementia prevention and control” held at DIU

Daffodil International University (DIU) and Sir William Beveridge Foundation jointly organized a seminar on “Dementia prevention and control” held on 07 September, 2014 at DIU auditorium. National Professor Dr. M R Khan was present at the seminar as chief guest. Mr. Md. Sabur Khan, Chairman, Board of Trustees (BoT) of Daffodil International University was present in the seminar as guest of honor. The 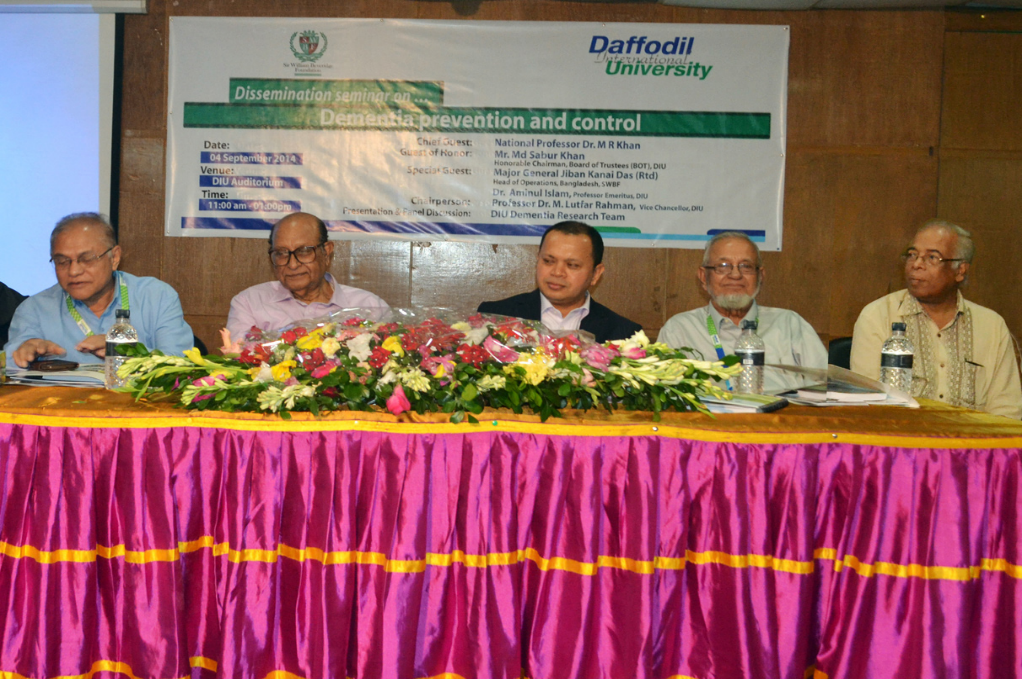 chairperson of the seminar was Professor Dr. M. Lutfar Rahman, Vice Chancellor, DIU. Major General Jibon Kanai Das (Rtd), Head of Operations, Bangladesh, SWBF, Dr. Aminul Islam, Emeritus Professor of DIU, Professor Dr. S. M. Mahabul-Ul-Haque Majumder, Dean, Faculty of Allied Health Sciences and Dr. Shah Md. Keramat Ali, Professor of the Department of Public Health was also present in the seminar as special guest. Speakers at the seminar said that Dementia is yet unfamiliar in our society. As we are experiencing a rise in the life expectancy and improvement in socio-economic condition in Bangladesh, we are likely to face the ever-growing menace of it. The physicians need to re-look at it and the society at large needs to know much about it so that effective care could be rendered at family as well as community level. They also stressed that there are currently nearly 36 million people with Dementia in the world. As many as 28 million of those living with Dementia worldwide do not have a diagnosis. The numbers of people living with Dementia worldwide do not have a living diagnosis. By 2050 it is projected there will be 115 million people with dementia worldwide. So we need for creating public awareness to control and prevent dementia as it is now a growing problem in Bangladesh and putting them in a stronger, informed position to seek a diagnosis and plan for the future and making more appropriate use of health and social services throughout the course of their condition.

The research on Dementia Related Problems and Prevention will help to identify the reasons behind dementia and their possible remedial measures to safeguard elderly people suffering from dementia. The government authority will also get direction for future initiative in this regard based on the outcome of the study.